Trinity Episcopal Parish in Wilmington Delaware seeks social justice and equality where it does not exist today.  Our sensitivities to the problems in our modern society were highlighted when the George Floyd protests exploded through the US and the world during the height of the pandemic lockdown.  The problems can be addressed by reform in a wide range of areas: Police, Justice, Housing, Education, Employment, Voting rights and the list goes on in the City of Wilmington, the State of Delaware our region and country.  Our parish members volunteer their time and get involved in order to improve our community and make positive change to help others in need.  Below is a list of resources you might find helpful in order to learn more, raise your awareness and get involved in a cause that is close to your heart. This is a living document and if you have additional information to add please let us know. 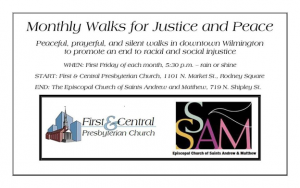 InterFaith Leaders for Neighborhood Ministries are meetings on  the second Thursday each month at 11:30 a.m.  If anyone is interested in joining, please email Jo and Ed Klinge at edjoklinge@gmail.com and you will be sent the zoom information on Wednesday prior to the meeting.  All are welcome at this networking meeting, especially those interested in working with and for our neighbors in and around Wilmington.

Here you can find Antiracist resources such as books, movies and podcast to further your personal education. To register or find out more about our programs visit: www.ywcade.org/what-we-do/rsj/

Roll Jordan Roll by Eugene Genovese
Displaying keen insight into the minds of both enslaved persons and slaveholders, historian Eugene Genovese investigates the ways that enslaved persons forced their owners to acknowledge their humanity through culture, music, and religion. He covers a vast range of subjects, from slave weddings and funerals, to language, food, clothing, and labor, and places particular emphasis on religion as both a major battleground for psychological control and a paradoxical source of spiritual strength.

Warmth of Other Suns: The Epic Story of America’s Great Migration by Isabelle Wilkerson
In this epic, beautifully written masterwork, Pulitzer Prize–winning author Isabel Wilkerson chronicles one of the great untold stories of American history: the decades-long migration of black citizens who fled the South for northern and western cities, in search of a better life.

Fire Next Time by James Baldwin
At once a powerful evocation of James Baldwin’s early life in Harlem and a disturbing examination of the consequences of racial injustice, the book is an intensely personal and provocative document from the iconic author of If Beale Street Could Talk and Go Tell It on the Mountain. It consists of two “letters,” written on the occasion of the centennial of the Emancipation Proclamation, that exhort Americans, both black and white, to attack the terrible legacy of racism.

Autobiography of Malcolm X As told to Alex Haley
In the searing pages of this classic autobiography, originally published in 1964, Malcolm X, the Muslim leader, firebrand, and anti-integrationist, tells the extraordinary story of his life and the growth of the Black Muslim movement. His fascinating perspective on the lies and limitations of the American Dream, and the inherent racism in a society that denies its nonwhite citizens the opportunity to dream, gives extraordinary insight into the most urgent issues of our own time.

Malcolm X by Manning Marable
Malcolm X unfolds a sweeping story of race and class in America. Reaching into Malcolm’s troubled youth, it traces a path from his parents’ activism as followers of Marcus Garvey through his own work with the Nation of Islam and rise in the world of black nationalism, and culminates in the never-before-told true story of his assassination.

Between The World and Me by Ta-Nehisi Coates
In a profound work that pivots from the biggest questions about American history and ideals to the most intimate concerns of a father for his son, Ta-Nehisi Coates offers a powerful new framework for understanding our nation’s history and current crisis. Americans have built an empire on the idea of “race,” a falsehood that damages us all but falls most heavily on the bodies of black women and men—bodies exploited through slavery and segregation, and, today, threatened, locked up, and murdered out of all proportion.

Why are All the Black Kids Sitting Together in the Cafeteria and Other Conversations About Race by Beverly Daniel Tatum, PhD
Walk into any racially mixed high school and you will see Black, White, and Latino youth clustered in their own groups. Is this self-segregation a problem to address or a coping strategy? Beverly Daniel Tatum, a renowned authority on the psychology of racism, argues that straight talk about our racial identities is essential if we are serious about enabling communication across racial and ethnic divides. These topics have only become more urgent as the national conversation about race is increasingly acrimonious.

I Know Why The Caged Bird Sings– Maya Angelou

The New Jim Crow: Mass Incarceration in the Age of Colorblindness– Michelle Alexander

So You Want to Talk About Race– Ijeoma Oluo

Just Mercy: A Story of Justice and Redemption – Bryan Stevenson

Salvatore “Sal” Fragione (Danny Aiello) is the Italian owner of a pizzeria in Brooklyn. A neighborhood local, Buggin’ Out (Giancarlo Esposito), becomes upset when he sees that the pizzeria’s Wall of Fame exhibits only Italian actors. Buggin’ Out believes a pizzeria in a black neighborhood should showcase black actors, but Sal disagrees. The wall becomes a symbol of racism and hate to Buggin’ Out and to other people in the neighborhood, and tensions rise.

Filmmaker Ava DuVernay explores the history of racial inequality in the United States, focusing on the fact that the nation’s prisons are disproportionately filled with African-Americans.

After graduating from Harvard, Bryan Stevenson heads to Alabama to defend those wrongly condemned or those not afforded proper representation. One of his first cases is that of Walter McMillian, who is sentenced to die in 1987 for the murder of an 18-year-old girl, despite evidence proving his innocence. In the years that follow, Stevenson encounters racism and legal and political maneuverings as he tirelessly fights for McMillian’s life.

Dr Don Shirley is a world-class African-American pianist, who is about to embark on a concert tour in the Deep South in 1962. In need of a driver and protection, Shirley recruits Tony Lip, a tough-talking bouncer from an Italian-American neighbourhood in the Bronx. Despite their differences, the two men soon develop an unexpected bond while confronting racism and danger in an era of segregation.

In early 1970s Harlem, daughter and wife-to-be Tish vividly recalls the passion, respect and trust that have connected her and her artist fiancé Alonzo Hunt, who goes by the nickname Fonny. Friends since childhood, the devoted couple dream of a future together, but their plans are derailed when Fonny is arrested for a crime he did not commit.

In the years before the Civil War, Solomon Northup (Chiwetel Ejiofor), a free black man from upstate New York, is kidnapped and sold into slavery in the South. Subjected to the cruelty of one malevolent owner (Michael Fassbender), he also finds unexpected kindness from another, as he struggles continually to survive and maintain some of his dignity. Then in the 12th year of the disheartening ordeal, a chance meeting with an abolitionist from Canada changes Solomon’s life forever.

A tribute to the controversial black activist and leader of the struggle for black liberation. He hit bottom during his imprisonment in the ’50s, he became a Black Muslim and then a leader in the Nation of Islam. His assassination in 1965 left a legacy of self-determination and racial pride.

When a group of civil rights workers goes missing in a small Mississippi town, FBI agents Alan Ward (Willem Dafoe) and Rupert Anderson (Gene Hackman) are sent in to investigate. Local authorities refuse to cooperate with them, and the African American community is afraid to, precipitating a clash between the two agents over strategy. As the situation becomes more volatile, the direct approach is abandoned in favor of more aggressive, hard-line tactics.

Ron Stallworth is the first African-American detective to serve in the Colorado Springs Police Department. Determined to make a name for himself, Stallworth bravely sets out on a dangerous mission: infiltrate and expose the Ku Klux Klan. The detective soon recruits a more seasoned colleague, Flip Zimmerman, into the undercover investigation of a lifetime. Together, they team up to take down the extremist hate group as the organization aims to sanitize its rhetoric to appeal to the mainstream.

Although the Civil Rights Act of 1964 legally desegregated the South, discrimination was still rampant in certain areas, making it very difficult for blacks to register to vote. In 1965, an Alabama city became the battleground in the fight for suffrage. Despite violent opposition, Dr. Martin Luther King Jr. (David Oyelowo) and his followers pressed forward on an epic march from Selma to Montgomery, and their efforts culminated in President Lyndon Johnson signing the Voting Rights Act of 1965.

In 1960s Mississippi, Southern society girl Skeeter (Emma Stone) returns from college with dreams of being a writer. She turns her small town on its ear by choosing to interview the black women who have spent their lives taking care of prominent white families. Only Aibileen (Viola Davis), the housekeeper of Skeeter’s best friend, will talk at first. But as the pair continue the collaboration, more women decide to come forward, and as it turns out, they have quite a lot to say.